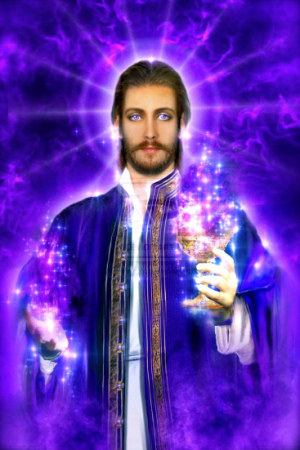 The Alchemical Beginning: Gold on the Wine

Gold On the Wine: How I became an Alchemist

This is the vitae and background story of how I came into the alchemy business.

I had done pre-med at the Honors College of the U of Michigan, grad work in Transpersonal Psychology and Ph.D. candidate in Parapsychology as well; this was in the ‘70’s.

Since the mid-‘90’s I was employed, as a chemist for a small nutraceutical company and my after hours research fascination was mining and metallurgy. I had been doing that research for about 15 yrs. While under contract to a Canadian mining company, I stumbled onto gold particles that are so small that they do not have the appearance or behavior of normal metallic gold; it is ‘white’ in appearance and very light and fluffy. This was very frustrating since the Canadians wanted Gold they could melt into bars.

During this period, a neighbor who is a gifted natural psychic stopped by the house when I was sitting out front. She walks up to me and says that she can see that I have a violet/purple aura and St. Germain is all around me. St. Germain is not a Roman saint. He is the patron of manifestation and metallurgy.
I told her that everyone in Sedona wants to hear that and I wasn’t really buying it, since I’m a professional scientist type. She told me a few St. Germain stories and said that he really liked his wine. Now this got my attention.
That night, just in case she was correct, I left a glass of wine out on a small table as an offering to St. Germain. The next morning I looked at the glass to find a fine layer of pure Gold floating on the surface of the wine. OK, there was my proof of St. Germain’s ability to manifest and he was hanging around me. But what is the message? The Gold is in the Wine and the Wine is in the Glass. I had been fire assaying the ore but couldn’t get the Gold to come down into a bead. Vis a vis the message, the Gold was in the Wine colored assay slag, a borosilicate Glass.
I kept firing on that Wine until I did finally get Gold bead. I put the bead on the analytical balance, with glass doors, but the weight kept going down. This type of balance is so sensitive that temperature variation will change the reading. I took the bead off, hit Tare and put it back on; weight still going down. Repeated the Tare procedure and again weight going down. At this point, I thought, well it can’t be that far off and let the bead sit there. After watching it for about 10 minutes, the weight had gone to 0.0000 and the Gold bead was GONE!

There was actually a profound metallurgical message in that little miracle that I had overlooked in my research. I kept bringing out the ‘white’ form of the Gold and remembered seeing some videotapes from a man I had met years previous in Tempe, David Hudson. So now I’m wondering if what I discovered on the lab bench is the ‘monatomic’ gold he had talked about that would lose weight and sometimes disappear.

Thula of Pleiades
I had discovered 2 deposits of a violet hued ore, (St. Germain’s favorite color) Goddess and Priestess Mines, that contained significant amounts of Gold but could never get it to concentrate or fire assay well. Now that I had discovered the alchemical base material, I remembered the download I had gotten from another local ‘channel’ / Sacred Sound healer, Andrea Clare Norvell.
This was years prior to the St. Germain intervention. I had asked my friend to find out for me what the Precious Elements content of the Priestess Mine ore is. Her contact is Thula of Pleiades. I had always intuitively known that star system was my original home and amazingly enough, a drawing of Thula looks identical to my daughter, go figure.
Thula told me that the PGE content was at 10% but that it was to be used for ‘healing purposes’. At that time, I just considered that info useless, I wanted the metallic form. Now that I had the St. Germain revelation of the true values, I remembered what Thula had said. OK, then I started repeating the extraction process on the Priestess ore.

I had left a small batch of the white powder next to the analytical balance for the next day. We had a dinner engagement with some friends that night and as I was shutting down all the lab equipment I thought to myself, “I wonder what would happen if I ate some of this?” I took about a kitchen match head worth of the powder and proceeded to pick up our friends.

As I was driving up the road into Sedona, I began to hear what the people in the back seat were going to say before they actually said it. A little while later I could hear what they were thinking in addition to what they were going to say. The road was very curvy and this phenomenon was rather disconcerting to the point that I had to turn to the people in the back seat and say “don’t think, don’t talk, I’m having a really hard time here.”

Needless to say, I had indeed discovered the ancient secret of the “white” form of the precious elements. Why was it referred to as the Philosopher’s Stone?

It took many months of experimentation to develop an efficient and reliable method of producing the ‘white’ non-metallic precious metals. Every time I would have a breakthrough in the chemistry, I would find myself watching my self from slightly above and outside what I considered my body. I would start performing procedures that I had never done before. My left-brain would start asking, “What are you doing that for?” My right brain would respond with “shut up and wait”. It was almost a dreamlike state. The result of the experiment was something I never would have predicted would happen.

The other factor that weighs in on the development is the input from “absolute elsewhere”. Remember that my neighbor said that St. Germain was around me all the time. Well, I think he had brought some other friends along too.

Some mornings I would come into the lab and things were just not exactly how I had left them the night before. It was if someone was working the night shift. This went on for some time to the point that I had to tell ‘them’ to leave my stuff alone. I went so far as to set up another small lab bench with all the similar materials and ‘they’ could do their own Work.

What ‘they’ did over the course of several days was to take some of my extraction solution, which starts out as a light golden color, then they took it to ‘white’, then to a deep purple wine color, then back to ‘white’. Colloidal gold is purple in color with sufficient saturation. What ‘they’ were showing me is that the material can go from the non-metallic state to metallic and back. This will turn out to be a significant revelation later on.

Now that it was unavoidable for my left-brain to deny the existence of other dimensional beings working in the lab on the night shift, I began to ‘see’ these beings as globes of light. It is like looking at distant stars through an ultraviolet haze. Occasionally they would manifest a humanoid form and appear as very tall ultraviolet Blue Beings. Living here in the Southwest, I had seen Hopi paintings of the Ancestors that looked exactly like my new lab assistants.

As my partner / guinea pig proceeded to investigate the effects of ingesting the ‘white’ substance she discovered that she would feel very tall, a violet ‘aura’ glow would appear around objects and some people. Occasionally, she could “see” into their true nature, i.e. whether they were bitter and shrinking or childlike and growing regardless of their age.

For me, the experience was beginning to understand some underlying principles of our reality and the nature of our individual relationship with the Creator. Animals and I had no fear of each other. We began to share a silent communication. In addition, I began to communicate with ‘spirit beings’ literally in the rocks of the mountains around our home.

These beneficent ‘spirit beings’ imbue the very substance of the ‘white’ elements. It has intelligence. This will become demonstrated in our high power microscopy studies later on. See https://priestessalchemy.com/orme-worms-microscopy/.