This is merely a visual comparison showing the similarity of the two samples. The most salient point is that the ORME/MFKZT has gone to a metallic state from exposure to Sunlight! 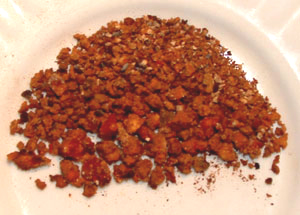 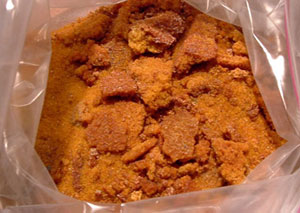 Elixir base ‘white-gold’ aka ORMs sundried for 4 hours in AZ sun. This material was snow white before getting a sun bake. Some of the flakes have turned black metallic.

It has been said by the Essene and others that leaving ‘white-gold’ in the sun for a year will stabilize the PGMs to metallic. You would need miles of greenhouses to keep it from blowing around though.

PGM salts have this classic orange color.
Unfortunately the resin did not stabilize the PGMs as metallic and the project has been abandoned. Cost about $500K.

The starting amount of Priestess Elixir base here is roughly the equivalent of 1/2 of 4 oz bottle of ZENergy.

Object: of the experiment was to convert 100ml of Cosmetic Grade ORME to Metallic atomic cluster size demonstrating that the Amorphous Colloidal Silica does contain elements whose clusters are below the threshold for Metallic behavior.

Procedure: 100 ml snow white filtered ORME was taken to a pH of -0.5 with the addition of 30% HCl and constant stirring.
Heat was applied with constant stirring for 1.5 hrs at 100C. Allowed to cool to 50C then a 20% solution of NaOH was added to bring pH to 10.8 (mixture is now slightly gray in appearance).
30% HCl was added again taking the pH to 0
20% NaOH added bringing pH to 2.5, then addition of NaBH4 slowly bringing pH to 7.0 (mixture is deeper gray in appearance).
2 ml of TR-6 PolySulfide added under constant stirring. Mixture is then vacuum filtered through 7 micron glass filter media to remove water.
Photos were then taken of the finished product and shown below: 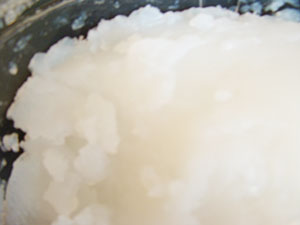 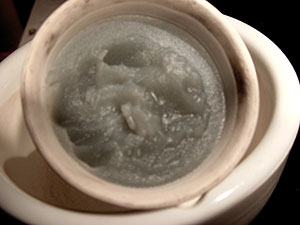 Shown above is the hydrated Silica containing ORME/MFKZT, that has been preciptitated at pH10.8

Shown above is 100 ml of the starting material shown to the left here after the Procedure described above. The gray color is due to the sub-metallic PGE (aka ORME) having now clustered the atoms up to metallic state and then further aggregated as polysulfides.

Oct 25, 2012 PGE recovery from Celtic Sea Salt
I ran a variation of the experiment shown above from previous day (above) by preciptitating Salt ORMUS from 25gm Celtic Sea Salt using KOH to a pH of 10.8 Then added 2 drops TR6 and vacuum filtered on glass 5 micron media. The result is show below. There are no visible metal polysulfides. 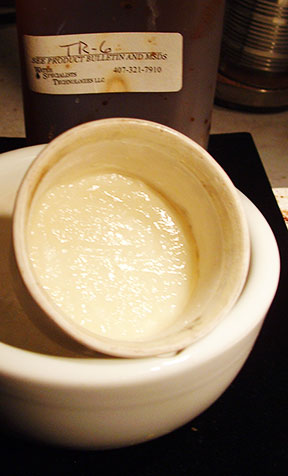 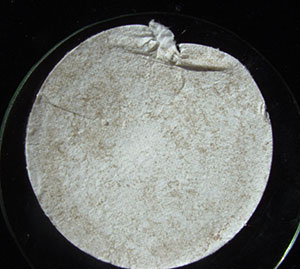 There are no visible metal polysulfides

WiFi Router EMF+ MSM Test
The following series of pics is setup for 3 gm MSM dissolved in 40 ml R/O water with 40 ml MFKZT added. Beaker was then set on top of WiFi router which is sitting on top of DSL. Cell phone was propped against the beaker and called every 30 min. The purpose of the experiment is to visually see if MSM and/or EMFs will convert the ‘ORME’ in MFKZT/ Vital Silica to a metallic state. Well WYSIWYG, so it is obvious from this experiment that the assumption that EMFs will convert Salt ORMUS or my Vital Silica to metallic is not correct. Currently, experimentation is underway for direct 1100W Microwave conversion to metallic state. Not so good so far. 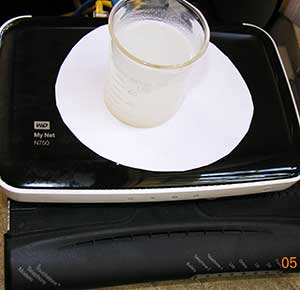 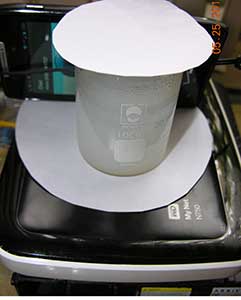 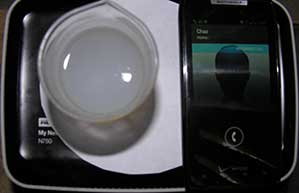 The images below were taken after 24 hrs on the WiFi, DSL, cellphone setup. 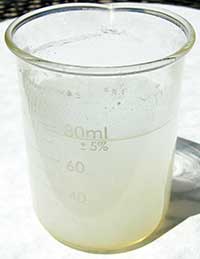 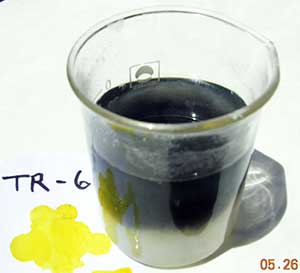 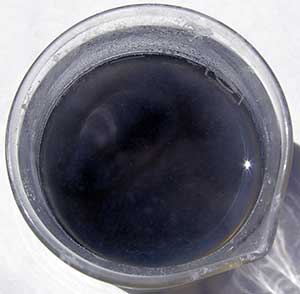 Please note Purple tint (Au) to the nano-colloidal suspension. This is indicitive of how much ORME PGEs are in the Priestess’ base ingredient. 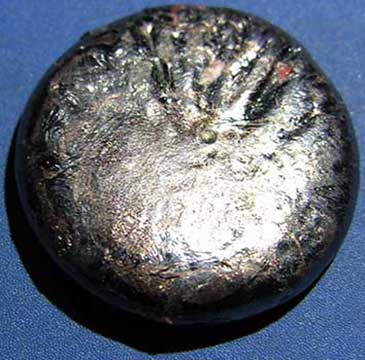 The above pic is indicative of the amount of ORME-PGEs in the average Stone of Heaven 30 gm. XRF indicates Ir, Rh, Pd, Pt, Au, Ag.

Shown in the left pic are wound strands of my hair. It looks like spun Gold. Believe me, it wasn’t like this 12 yrs ago before I started making Quintessential Gold™ 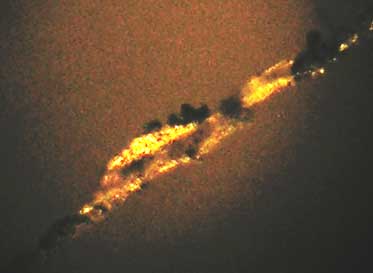 The image above is example of the Silica strand web structure. The transparent beads on the web are the PGEs in non-metallic form. For more microscopy Click Here

The image above is of the nano beads on the Silica that have been reduced to metallic and undergone fire assay. The metals have been identified by XRF as mainly Pd and Rh with Au, Pt, Ir.

As you can plainly see in the above pics, the Platinum Group Elements (M-5) are not chemically bound in any manner to the Silica but rather merely stuck on like flies stuck on a spiderweb.
Since there is no chemical bonding of the PGEs, they are freely available to catalyze organic reactions. Your body is an organic engine. Imagine what could happen as you up the performance of that engine.

Image shown below is demonstrating the green mono aka ORME Gold in a fusion state with the Silica. This material will then be solubilized and filtered. The resulting filtrate will undergo a reducing precipitation and yield the basis for the product line. 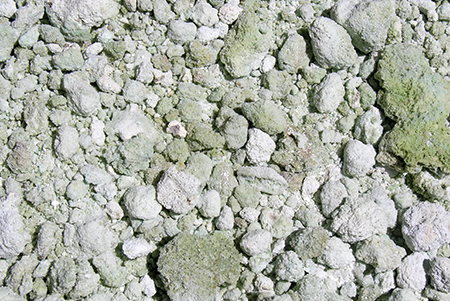 The slag shown below was made from a fire assay done on 10/15/2016 and today is 12/6/2017. So that white stuff has been efflorescing for over a year now with direct exposure to humidity and air. 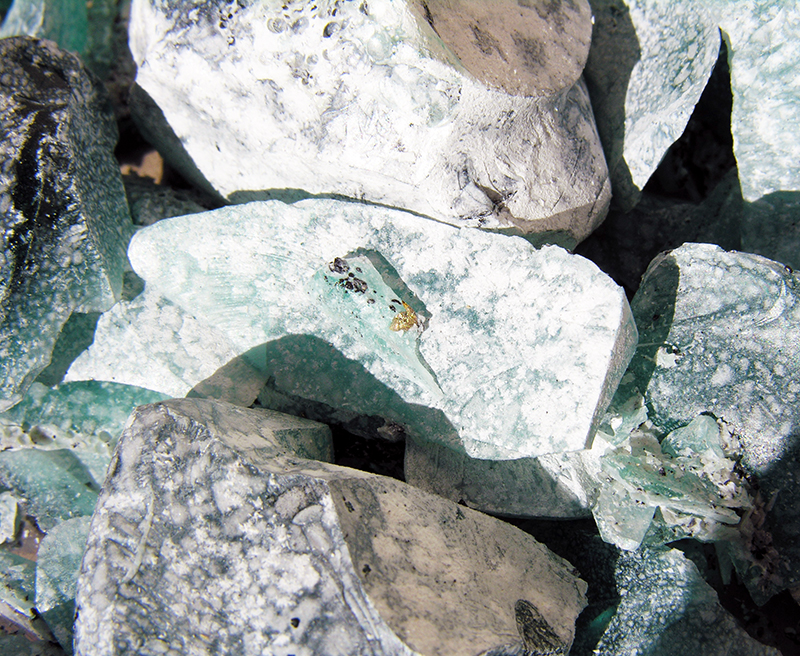 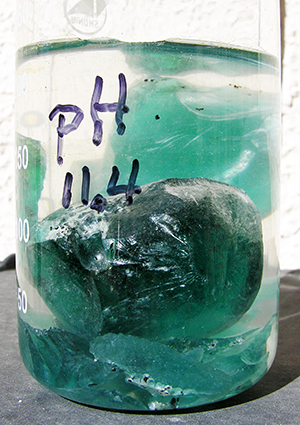 So what do we think that white coating on the slag is? ORMUS? Nah, it is unreacted Sodium Carbonate that effloresced out of the slag. From Wikipedia: “efflorescence (which means “to flower out” in French) is the migration of a salt to the surface of a porous material, where it forms a coating. The essential process involves the dissolving of an internally held salt in water, or occasionally in another solvent. The water, with the salt now held in solution, migrates to the surface, then evaporates, leaving a coating of the salt.” Why do I think it is Sodium Carbonate? Check the image on the right; that was pH 7 R/O water poured over the slag to solubilize that white stuff. What? the pH is 11.4 ??? So what is the pH of Sodium Carbonate in water? From www.sciencing.com, “One gram (0.035 ounces) of sodium carbonate dissolved in water and diluted to 1.0 liter (about 1 quart) will produce a solution of pH 11.37”.

And what is the pH of alleged ORMUS supposed to be? pH 8.4 – pH 10.7 Now is anyone that confused or chemically uninformed enough to think that Technical Grade Sodium Carbonate by itself will be carrying ORMUS? If so, please sign up for an online Chem 101 class.

OK, now let’s take another look at the Milewski experiment: John had his assay slags stored in plastic freezer bags for a year or so. If that alleged ORMUS was in the air, how did it get through the plastic bags? Big problem! And do you really think that there was sufficient ORMUS in the amount of air exposed to those plastic bags to build up? or do we drop back to Occams’ Razor and attribute John’s white stuff to unreacted Sodium Carbonate?

Now I don’t want to disparage John’s work as a physicist or any of his work with microwave recovery of Gold from glass (plenty of YouTubes on that topic and I have successfully used microwave to metallicize PGMs from ORME materials). But John was merely making suppositions about that white stuff on slag. And his statements about the Gold accretion as points? That is how the Gold in an assay slag does build up upon itself until it gets heavy enough to drop through the slag to the assay button on the bottom of the crucible.

Oh, and what about that buildup of white stuff on rocks in new Mexico? oops, could those be Carbonaceous ores? And again, the Carbonates are efflorescing out of the rocks and/or the rocks are erroding from the weather to expose the Carbonates?

All I am doing here is to question the apparently common assumption, based on these various suppostions, that ORMUS is a Gas. Unless anyone takes the time to replicate any experiment then all you have is a statistical basis of 1 (one) and it is not legitimate in statistical analysis to work from a data base of one and draw a conclusion. So now we have a data base of 2 (two); experiment 2 that contradicts experiment 1. Can we legimately conclude that ORMUS is a Gas from both of these experiments? Nope.

Now Barry Carter insists that a. ORMUS is a gas and b. that ORMUS = ORME (as per D.R. Hudson). So if ORME = ORMUS is Gas, then how did Hudson get it into that vial and it didn’t just excape through the glass or the edges of the stopper? Big problem!